“Motivation is when your dreams put on work clothes.” –Benjamin Franklin

While I’ve never been accused of being unmotivated, I do find myself so distracted these days, focusing on blogging, tweeting and working on the “business side” of writing, that my dream of finishing my book has taken a backseat.

My mind is starting to think in 140 characters rather than long, delicious prose, and that, my friends is not a good thing. Sooooo…I’ve decided that I’m going to turn up the white noise for the next several days, or maybe even a week, and immerse myself in writing my next chapter.

If I don’t respond to your emails, Tweets or Facebook quips, please don’t take it personally. I’m just putting on my work clothes and chasing after my dream.

Wish me luck…I’m heading on another crazy adventure!

APRIL 1989: Jeffrey and I have been together little more than four months when I get my first taste of what life is going to be like with him. 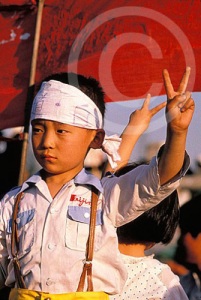 First, if you’ll flash back with me briefly, you might remember that 1989 is a year of extraordinary change around the world—everything from China’s Democracy Movement to the fall of the Berlin Wall to the Dalai Lama winning the Nobel Peace Prize to Gorbachev being elected Russia’s new president.

Another dramatic event taking place is that Aung San Suu Kyi is about to be voted Burma’s first democratically elected leader in nearly thirty years.

Jeffrey is in Bangkok finishing up an assignment for Newsweek when he receives a call from The Christian Science Monitor. “We have a project for you in Burma,” he hears.Those few words are all it takes before he agrees to the assignment.

Burma has been closed to the outside world for decades—at least to journalists—isolated by its brutal military dictatorship; Jeffrey knows this is an unusual opportunity.

At one time Burma had been the wealthiest nation in Southeast Asia and the largest exporter of rice, oil and teak. Its capital, Rangoon, often referred to as the “Queen of the East,” had been a vibrant metropolis brimming with a highly literate population. But a 1962 coup d’etat, followed by rampant corruption and the catastrophic economic plan, The Burmese Way to Socialism, turned this country upside down.

With Burma’s current economic bankruptcy and the UN’s label as one the least developed countries in the world, a tiny crack has been pried into this iron-fisted country, one just large enough to allow a handful of tourists to visit–along with their money. Jeffrey is one of them.

Abercrombie & Kent, one of the few tour companies operating in Burma, organizes a seven-day visit for Jeffrey, the maximum time allowed by the Burmese government. His itinerary will take him to Rangoon, Pagan and Mandalay, where his assignment is to capture the stark beauty of the country and the everyday life of people in this isolated land. 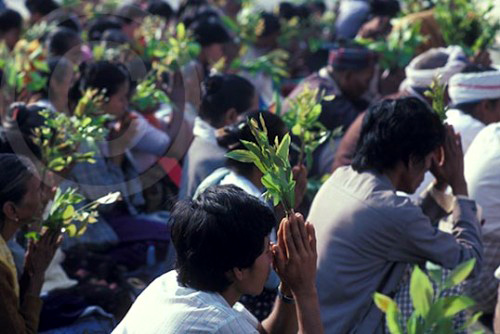 Inside A & K’s air-conditioned Bangkok office, an employee, Ms. Too, hands Jeffrey his plane ticket, visa and itinerary. Then she says, “Mr. Aaronson, there’s just one thing: there’s been a terrible crackdown in Rangoon. Martial law has been imposed. The elections are coming up and Aung San Suu Kyi has been placed under house arrest by the junta to prevent an uprising. It’s not safe for you to go.”

The nervous employee, of course, is sharing this news so that Jeffrey will postpone his trip, but Jeffrey’s mind is working in the opposite direction.

“Is the airport still open in Rangoon?” he asks.

“Then I better get going.”

“Mr. Aaronson, I’m not sure that’s a good idea. No journalists are allowed.”

Jeffrey, not to be dissuaded, replies, “Who said anything about a journalist? Remember, I’m a tourist, going on vacation to visit the beautiful country of Burma.”

“If you must go, then please be careful,” Ms. Too says with pools of concern in her eyes…

Read Part Two in my next post…Sorry, I don’t mean to leave you hanging, but even the uber condensed version of this complicated story is too long for one post. I hope you’ll check back to find out what happens. In many ways this improbable story epitomizes Jeffrey’s career, and also the beginning of our relationship.

NOW: A FEATHER IN HER CAP

SEPTEMBER 2011: The events of 1989 were hugely memorable, but not be outdone, we also just experienced our own “big event” right here at our house last week. Our daughter, Olivia, got to have two feathers put in her hair.

I know, I know. It’s not exactly the kind of “big,” you might have imagined, but in the life of a 7-year old, it’s huge. Believe me. 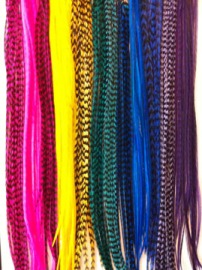 If you’re trying to imagine what the heck I’m talking about, let me clue you in to the world of 2nd grade girls. The latest craze is having one or two…or several thin feather extensions threaded into your hair to add a splash of color and pizazz.

When our daughter first told me she wanted a feather like all the other girls, I have to admit I cringed. Really cringed.

I couldn’t imagine our sweet little bean with a Steven Tyler-like feather in her beautiful curly tresses.

Eventually though, because Jeffrey and I try not be ogres (well, at least most of the time), we told our daughter that if she really wanted a feather, we would let her get one if she worked hard at a challenging personal goal she was trying to achieve.

We set a date, marked it on the calendar, and gave her several tools and suggestions to help her reach her goal. Then we set her free to do it.

Somehow it reminded me of when I was training for my first New York City Marathon, and the calendar I had made charting out my 16-week training schedule. It seemed epic at the time, and I had no idea how I’d ever get through my first 10-mile run, let alone get to the finish line of a 26.2 mile race. But having a visual chart made all the difference. It was a constant reminder.

The same held true for Olivia. Like marathon training, many days were tough, but at the end of the day, after she worked her hardest and did what she need to do, she put a check mark on the calendar, and each time we could see her confidence grow.

Well, last Thursday her calendar was finally filled with check marks. She reached her goal.

I never imagined that a hair salon appointment could ever turn into a family celebration, but that is exactly what it was. 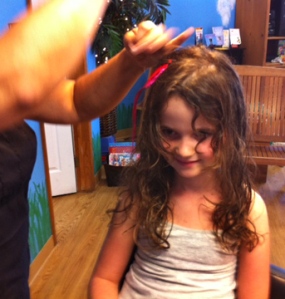 We took Olivia to the salon immediately after school to pick out her feathers . She chose her favorite colors, pink and red, and the stylist quickly crimped them into her hair. All the while Jeffrey took pictures with his IPhone and I blinked back tears as I watched Olivia’s pride glowing in the mirror.

Nowhere did I see visions of Steven Tyler. All I saw was a sweet little girl who had kicked some serious butt and had grown in multiple ways along the journey.

I clearly never would have chosen a feather for Olivia, but now I adore the look because it represents her hard work, determination, and her ability to overcome a daunting challenge.

The piece de resistance is that she got her feathers just in time for her 2nd grade school picture. Now she’ll always be able to look back at her photo, see those feathers and remember that she can do anything if she puts her mind to it.

Here’s to the feather in Olivia’s …I mean hair. This mama couldn’t be prouder (in case you couldn’t tell).

We all need “feathers” once in awhile. I’d love to know what motivates you to stay on track and reach your goals, especially when things get tough. Leave me a comment and share your feathery moments!