Behind the scenes: It’s 1991 and Jeffrey is working on assignment for Travel Holiday in Moscow. Preeminent writer, Orville Schell, has written an in-depth piece about the renaissance of the Russian Orthodox church, and Jeffrey has been hired to photograph the story.

It’s a mind-numbingly cold January day when Jeffrey walks through Red Square with his interpreter, Alexi. People all around are dressed in heavy wool coats and classic fur caps. Jeffrey wears his American version of warmth—expedition weight Patagonia gear—but he still cannot feel his fingers or toes.

Once he enters St. Basil’s Cathedral though, Moscow’s iconic nine-domed masterpiece, and he’s lead through a series of dim, narrow chambers, he is instantly warmed by what he sees transpiring behind closed doors. A small group of artists is painstakingly restoring the frescoes and woodwork of this magnificent16th century structure.

Jeffrey and his interpreter see a dark-haired woman perched high atop scaffolding, restoring the face of an angel on one of the domed ceilings. When the woman sees the two, she immediately stops what she’s doing and looks down from above.

Jeffrey simply smiles and says in his best Russian, “ZDRAST-vwee-tye” (hello). “KAK VAS za-VOOT” (what is your name)? “Menya zavut Jeffrey” (my name is Jeffrey).

She can tell by his clothing that he’s not Russian. A broad smile crosses her face when he continues with every Russian phrase he has learned. Even though his grammar is nowhere near perfect, his accent is strikingly authentic, and in a matter of minutes he has endeared himself to the artists around him. 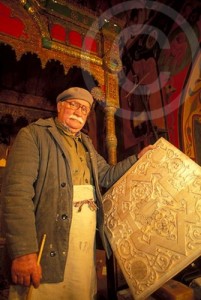 In no time they are all laughing and showing him into other back rooms, speaking to him in Russian as if he should understand every Cyrillic word. Jeffrey doesn’t need to comprehend a thing; their pride in what they are doing says everything.

It is a new era in Russia. Under Mikhail Gorbachev’s leadership and policy of Glasnost (openness and freer discussion of issues), the Russian Orthodox Church is slowly coming back to life.

Prior to Gorbachev, the Soviet regime was committed to the complete annihilation of religion. Based on the ideology of Marxism-Leninism, atheism was the official doctrine of the Soviet Union and it became a high priority for all Soviet leaders in the Communist Party.

Not only did the state destroy churches, mosques and temples, but it ridiculed, harassed and executed religious leaders, flooded the schools and media with atheistic propaganda, and promoted ‘scientific atheism’ as the truth that society should accept. And just like all private property, any Church-owned property that wasn’t destroyed, was confiscated and put into public use.

When Jeffrey arrives in Moscow, he senses the delicate dance of the new political and social freedoms unfolding around him. Russians are clearly embracing change, but they’re also cautiously optimistic, knowing things could change again quickly during this turbulent political time. 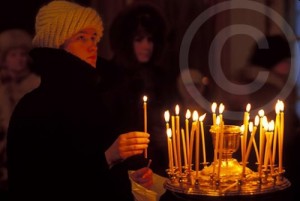 During this assignment, Jeffrey photographs nearly a dozen churches—previously confiscated religious buildings that have been returned to the church–some still surrounded by barbed wire, some with gilded onion domes shimmering in all their glory, and some even holding  elaborate services once again.

As Jeffrey climbs up the rickety scaffolding inside St. Basil’s Cathedral to photograph the artist painstakingly restoring the frescoed ceiling, he knows he’s about to create an image that perfectly symbolizes the renaissance of the Russian Orthodox Church. One person at a time, one brush stroke at a time.

Eleven months later, after the fall of the Soviet Union, the government of Russia begins to openly embrace the Russian Orthodox Church, and the number of the faithful rises once again in Russia.

The photograph above was created with a Nikon F4 camera, a Nikon 24mm lens, SB-16 flash, and Fuji Velvia film.

To view a few more of Jeffrey’s photographs of Russian Orthodox Churches, click on this link:  See More Churches