For those of you who love the smell of newsprint with your morning coffee, I have a movie for you: Page One: Inside The New York Times.

This film was nominated for the 2012 Critics’ Choice Award in the category of Best Documentary Feature, and was also listed as one of the 50 Best Movies of 2011 by Paste Magazine.

The gist of the film? It’s essentially a fly-on-the-wall look at The New York Times and the people who put it together. Through four memorable journalists who work on the Media Desk, the film examines how this prestigious newspaper, and others like it, are struggling to survive in the age of digital information. With the Internet surpassing print as the main source of news, and newspapers going bankrupt all over the country, Page One chronicles this grande dame and the media industry in the midst of its greatest turmoil.

Page One delivers the perfect mix of journalism, politics, publishing and all the people who work with or depend on it. You might call this film a love letter to a dying art form, the American newspaper, and a celebration of the traditional values of journalism in a time when our need for free, immediate information is chiseling away at that honored discipline. 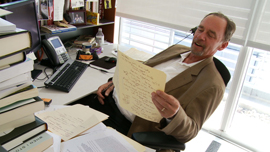 This film is worth seeing for David Carr alone. An irascible media columnist, single parent, former crack addict and welfare recipient, Carr pumps this film full of verve with his intelligence, wit and his “No BS” approach to reporting. I say move over Brad Pitt and George Clooney–it’s David Carr who really deserves an Oscar, even if he is just portraying himself.

The other unlikely star of the film is the imposing Times headquarters designed by Renzo Piano. Even though the newspaper sold the building in 2009 and leased part of it back because it was on shaky financial ground, it’s hard not to be impressed by this gleaming monument. In many ways the building represents all that is right and wrong with the industry in the midst of rising new media. 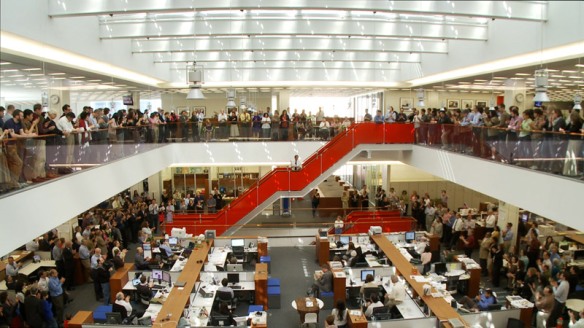 If I had any criticism of Page One, it would be that it’s a bit scattered, following many intriguing threads, yet never tying them all up into one cohesive bow. Still, news junkies, writers, photographers, and anybody who cares about the future of media will appreciate this smart film.

My other criticism is less a criticism and more a personal wish: I wish the movie had focused on other sections of the newspaper as well–partly because we’ve worked with so many of them over the years. I wish we could have glimpsed our colleagues in the Travel, Business, Week in Review, or Arts & Leisure sections, or even the Magazine, who have all hired Jeffrey over the  years and licensed his photography and our agency’s photography. I would have loved to have heard their thoughts about the state of the industry and where they think it’s heading in the digital age.

If any of you have seen the movie, I’d love to hear what you think. If not, I’m curious to know what you think the future of media brings for newspapers. Is it possible for them to stay vital and solvent? Drop me a comment and share your two cents.